Mother celebrated with a sign on her car that her son no longer has leukemia: “I know that God healed him” 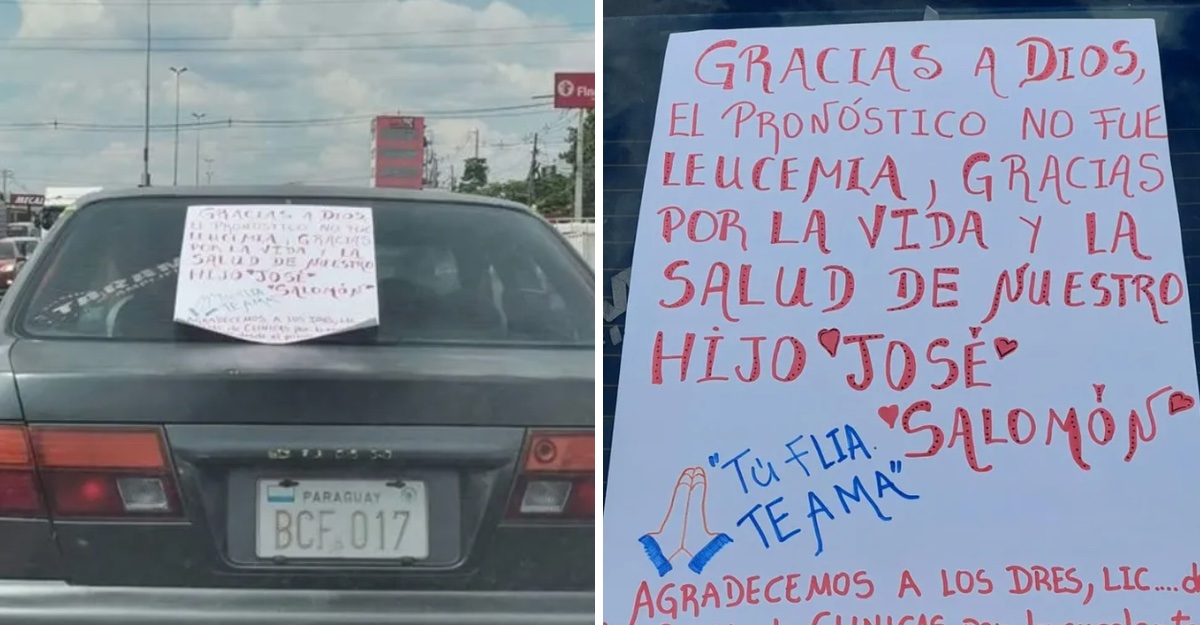 “My promise was that I was going to put a sign by the car so people would know the greatness of God and the miracle he did for my son,” said Sonia Raquel Bolla, who celebrated when she received the news that her son no longer has cancer.

Only parents will understand how difficult it is to deal with their child having a serious health problem, because in those circumstances one can only hope that their little one will get better soon and be able to live a normal life. However, sometimes getting to that point of recovery is a long and painful process that no one would ever want to be in.

That is why mothers and fathers will do everything in their power to help their little ones in these circumstances. Sonia Raquel Bolla, a mother from the city of Mariano Roque Alonso, Paraguay, knows this very well. She recently had to deal with a difficult time when her one-year-old son fell ill.

“Fifteen days ago, my baby started to bleed from his nose. First, it was only one nostril, then both nostrils, and heavily. He also started to get spots on his skin and bruises. I took him to the clinic and the doctor referred me to the emergency room. There, they told me that it was probably leukemia. I got scared and started crying,” said Sonia, according to Extra

When she thought her son might have cancer, the mother became deeply worried because she knew that these situations are extremely serious. However, she tried to exhaust every possible avenue to rule out this oncological disease.

To do so, she needed the baby to undergo a bone marrow test. “At first we accepted. Then I remembered that a friend’s son had a bone marrow test, and it was very painful. I said that my baby wasn’t going to do it and I refused,” she recalled. However, she managed to be convinced because it was urgent to do this test.

“He cried a lot in my arms while they put him under anesthesia, and little by little, he fell asleep. I put him down on the bed and went out crying. My fear was that he wouldn’t wake up again. I went into the living room, knelt down, and prayed to God and told him to take the pain away from my son and give it to me, because I could endure more than him. I cried a lot, and my husband told me to be strong. 10 minutes later, they brought my son in all languid with several doctors, and I thought something bad had happened,” she said.

Fortunately for her, however, the baby had withstood the test well, and during the weekend, the good news arrived with the results of the test. She was told that her son didn’t have leukemia. “I know that God healed him, and my promise was that I would put a sign around the car so that people would know the greatness of God and the miracle he did for my son,” she said.

So, Sonia put a sign on the back of her car that read: “Thank God, the prognosis wasn’t leukemia. Thank you for the life and health of our son, José Salomón. Your family loves you. We thank the doctors, graduates of the Hospital de Clínicas for the excellent care from the very first moment”.